David Packer’s piece Bears that Dance accompanies the Grimms’ fairy tale “Snow White and Rose Red.” This archival pigment print of the piece is 16 x 24 inches and is limited to an edition of 10 (3 are still available). Both the original ceramic bears and the print have been shown in a number of exhibits, including the Mirror Mirrored show at the WPA gallery in Washington DC, which was reviewed in The Washington Post. 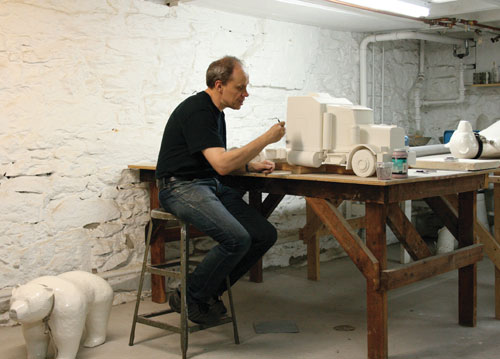 was born in England and has lived in the United States since 1983, living in Washington D.C., Miami, and New York. He graduated from Florida State University, Tallahassee, with an MFA in 1994. He has had one-person shows with Garth Clark Gallery and Lyons Wier Ortt, both New York, Le Cube and Dar Tazi, both Morocco, and Navta Schulz Gallery, Chicago. Other group shows include Exit Art and Gallery Satori, both New York, the Museum of Fine Arts, Tallahassee, Florida and the City of Bellveue, Washington. He has been in residence at the MacDowell Colony, Yaddo, the Kohler Arts/Industry program, all in the United States, and Youkobo Art Space, Tokyo, Japan. In 2011 he was the recipient of a Fulbright Scholar award to research ceramics in Morocco. David maintains a studio in Long Island City, New York.