“When she woke up early the next morning, to her great surprise one of the little stars was making itself into a pancake for her breakfast!” 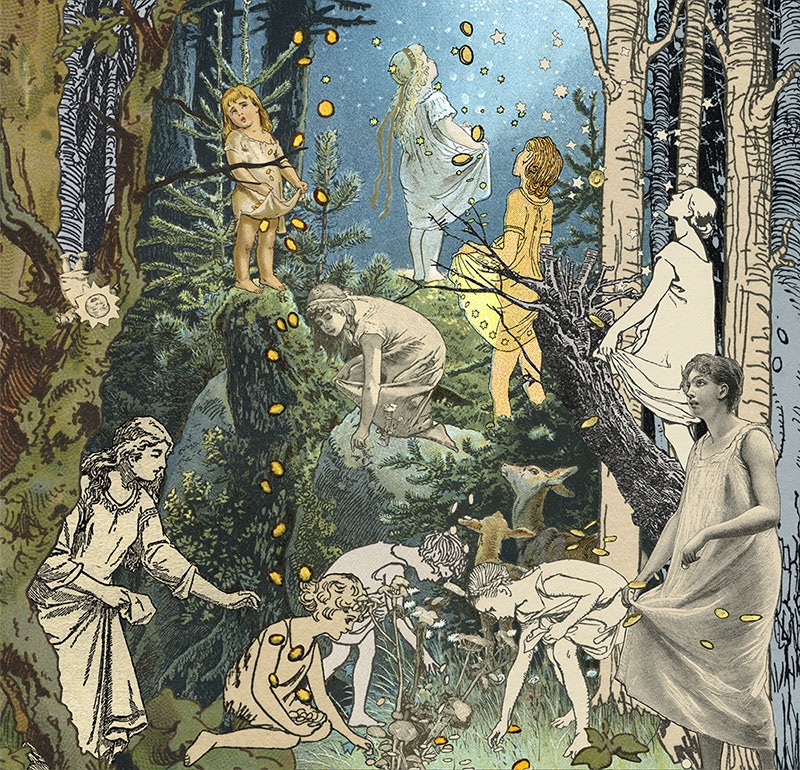 It is not unusual to read different versions of the same wonder tale. Indeed, the Brothers Grimm were master amalgamators and combined the best bits of different versions of stories into a final version for publication. One of their stories, “Die Sternthaler” (“The Star Coins”), though, was “written down from a somewhat hazy recollection,” trusting that someone “will complete and correct it.” While the Grimms’ version is included in Mirror Mirrored, I recently ran across another telling in The Disobedient Kids and Other Czecho-Slovak Fairy Tales by Božena Němcová, as interpreted by William H. Tolman and V. Smetánka, and illustrated by Artuš Scheiner. (I opened this book thinking it would have some wonderful tales about mischievous children but the “disobedient kids” turned out to be young goats.) I have edited their take on the story and included it below. It varies slightly from the Grimms’ tale in that the young girl is not totally alone in the world and is instead traveling to her aunt, and that the stars take a turn as breakfast before later turning to gold. I hope you enjoy this story, and the collage above from various renditions of it including artists such as Victor Paul Mohn, Hermann Vogel, Arthur Rackham, Ella Dolbear Lee, Robert Leinweber, Heinrich Vogeler, and Otto Ubbelohde.

Once upon a time, there was a six-year-old girl named Bozena. She had nothing in the world but the clothes on her back and a piece of bread, which her poor godfather had given her when he sent her off to her aunt.

She set out for the village where her aunt lived in a little hut, and it seemed very far away to this little girl. She was timid and afraid as she trudged along, and oh so lonely. At a turn in the road, she came upon a poor beggar who said, “Little girl, will you give me something to eat? I am very hungry.” She gave him her whole piece of bread without hesitation and said, “God bless it to you.”

By this time it was quite dark. As she continued into the wood, Bozena met another little girl who was shivering with the cold. The girl had no shirt and seemed to be in great distress. Bozena thought, “I can spare my shawl and will give it to her.” She parted ways with her shawl and continued on.

After a little while, she met another little girl who was so poor that she had no skirt. It was already nearing the end of autumn and winter was coming soon, so Bozena took off her own skirt and gave it to the poor little girl. The cold did not trouble Bozena very much because she had done a good deed and her little heart grew warm at the thought of it.

All at once, deep in the wood, Bozena saw little stars falling in her path way. She went closer to see what they looked like. They were yellow and shone brightly. She started to gather them in her hands, tossing them up and down. “Oh, if I only had an apron,” she thought. Suddenly, an apron appeared! She collected the little yellow stars in her apron and, growing very tired, fell asleep.

When she woke up early the next morning, to her great surprise one of the little stars was making itself into a pancake for her breakfast! She ate all she could and still had some left.

She set off and, after walking a great distance, reached her aunt’s hut that evening. She kissed her aunt and said, “Oh, auntie, see what I have in my apron.”

When she started to show her aunt, instead of the little stars that she expected to see, a stream of gold pieces poured out of her apron and rolled all over the room.

Imagine her poor old aunt’s joy and surprise. Now she could not only take care of Bozena, but could do much good for others all the rest of her life. 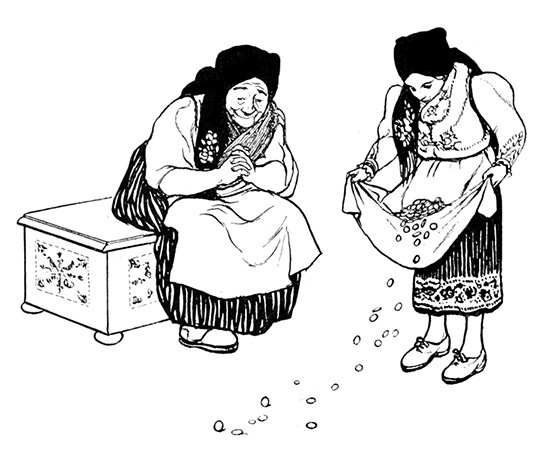 GET WEDNESDAY WONDER TALES IN YOUR EMAIL INBOX