Tom Olson and the Tiger: An Animator’s Tale

Robert Frost famously wrote, “Two roads diverged in a yellow wood, And sorry I could not travel both . . . . I took the one.” The writer Frank Stockton had previously put it a different way: A youth has to choose between two doors, one of which hides a beautiful maiden he must marry and the other a tiger who will devour him. Tom Olson knows this choice all too well, but to get to that point we first have to travel a few decades back through time. While these days, Olson and I exchange texts about the ramifications of firefly incest and the suitability of the Kool-Aid Man to voice the Hindu god Brahma, our witty banter about the artistic process was not always a foregone conclusion.

This story starts in 1979, when I was being born in a North Carolina hospital and Olson was a disillusioned ex-graduate student in Ithaca, New York, having moved there to study philosophy at Cornell University. We both spent the year sleeping fitfully in student housing.

Olson’s fitful sleep, having decided that the philosophy he studied had been completely pointless, was born from living in a basement apartment with grocery trips to buy peanut butter, nonfat dry milk for homemade yogurt, and popcorn. He was surrounded by leftists distributing single-spaced typed proclamations, but was convinced there was more to propagandist literature and, ultimately life. Tom Olson’s road from former philosopher to flipbook artist started much like his left-leaning acquaintances: with the distribution of pamphlets. Instead of distributing mimeograph-machined manifestos, however, Olson handed out cartoons. (Which allegedly still exist in some long forgotten manila folder.)

Finding the still cartoon form somewhat limiting, but (wrongly) feeling he had no drawing talent of any kind, Olson luckily stumbled across a flipbook, which he responded to with amazement at how little ability it took to make something move. Like a magician, Olson soon found he could create a rabbit able to fly into the sun or instantly transform the sun into a wrecking ball. Even better, with the benefit a circle stencil, Olson didn’t have to rely on his non-existent art school training and could make oranges that turned into Swiss cheese that became grapes. Thus The Adventures of the Little Circle and The Little Circle Goes Wild came to life.

The Life of A Flipbook Artist

No longer in grad school, but instead working part-time for minimum wage as a museum guard at the Cornell Museum, Olson whiled away the hours at the galleries thinking of ideas for his flipbooks. Because his primary responsibility as guard was to stop museum visitors from writing with pens, he had to be on constant alert for visitors so that he had time to put his own pen away, thus gaining the moral authority to stop other people from using theirs. After work, Olson would take his ideas back to the basement apartment where he had installed a large piece of glass between two desks, taped it around the edges, and spraypainted it white, creating a makeshift light table to work on.

Olson was delighted that he could make the sun come out and scare someone, make a runner jump off a cliff (and the cliff save the runner), and that he could even make speech happen. With his newfound godlike powers, Olson realized that whereas most flipbooks were based around the idea of “Hey look it moves!” he could, within the narrative confines of ten seconds, actually create and resolve dramatic tension. Thus, such stories as How the Sun Becomes the Moon and Why the World is Round where born.

Explaining the impetus behind Why the World is Round, Olson says he is fascinated by world-origin stories. In Christian and Jewish theology, there is one God who says, “There is nothing, there needs to be something, and I’m going to create the earth, the sea, the darkness, and the light.” Hindu mythology, in comparison, has both a creating god and a destroying god. Brahma would say, “Hey, how about this?” and then Shiva would say “KABLOOM!” Olson thought the latter worldview would be an interesting way to develop our universe, and created an earth developed by iterative process in which a cubic earth is destroyed, a pyramidal earth is destroyed, and a spherical earth is adopted by Vishnu who hoists a little “earth” flag on the sphere.

Between his time stenciling circles of the earth and illicitly brainstorming with a pen, Olson found another source of inspiration. On the way to the nonfat dry milk, Olson noticed there were many bananas in the store that were about to be deliciously consumed, but that a much sadder fate awaited the Chiquita labels. Thus, he starting stealing Chiquita banana labels on the side for a new flipbook, as you can see here:
Ultimately deciding to turn away from the criminal life of fruit-label stealing he saw looming before him, Olson worked on perfecting his drawings and people started appearing. To be fair, people only appeared in profile because that was the limit of Olson’s representational aspirations, but it is remarkably effective for his stories’ purposes. And, as people in profile started showing up, so did romance. After all, Olson was in his twenties and what young man doesn’t like kissing?

Now in full command of his artistic gifts, he sought a publisher for his flipbooks. Sure enough, a publisher quickly picked up the little books with a phonecall saying “These are fantastic and we definitely want to publish them; we just need to talk to production and will call back soon.” Olson, thinking he was now on his way to the street level and beyond, celebrated with his friends and some cheap champagne. At the same time as this Ithacan jubilation, however, the New York production department was realizing that they couldn’t make the flipbooks for less than $3 and couldn’t sell them for more than $4, so the numbers just weren’t going to work. Undeterred, Olson sought out more publishers, who all told him the same thing. Somewhat more deterred, he went to law school.

Although Olson had just barely cracked open the door with the hungry tiger behind it, he concluded that a better doorway to walk through might be the one behind which lay a successful career as an attorney with a marriage to the beautiful maiden. With this realization in hand, he, over the years, attained several sought-after legal positions in Washington, D.C. and became a proud father to two lovely daughters, as well as the owner of a picturesque suburban house with several pets. I could rattle off a truly impressive list of his career and life achievements that are, of course, all well and good, but Olson could never quite scratch the itch of wondering what was behind the other door he barely cracked open all those years ago.

So it was, late one Friday evening after a friend introduced me to Tom and he had invited us all over to dinner, that he pulled out a musty, old box full of his 1979 flipbooks. Everyone is the room was immediately enchanted. A full flipbook tour ensued, as one magical adventure after another sprang out from an almost bottomless box. The audience oohed and aahed for a while before moving on to dessert. As the evening was winding down and the guests started discussing their weekend plans, I started persuading Tom to let me walk away with his treasures tucked securely under my arm.

A short time later (in the scheme of things), I had curated and was installing a solo show of these pieces at a Massachusetts college art gallery, one state away from the Cornell gallery where the flipbooks had been born. I made reproductions of several flipbooks for visitors to enjoy, printed out some of the flipbooks in their entirety in poster format (which you can see and acquire in the Printorium for yourself), and had two projectors playing all flipbooks all the time. The show was, in my opinion, delightful beyond belief. Children of all ages, as well as the director of a nearby museum, agreed. That director wrote me (and I am paraphrasing), “I loved the exhibition!!! You did a fabulous job making the material really come to life. GREAT work!!!” Armed with these exclamation marks, I convinced Olson to come see the show for himself.

Tom, whose wife was busy saving the world in Los Angeles, brought a pair of friends with him to see the exhibit. We spent a couple days touring the area, enjoying the museums, and acting out the flipbooks in person. We had some delicious Italian food, a more questionable breakfast, and said our goodbyes at the local ice cream parlor. This undeniably pleasant weekend did not, however, prepare me for what was to come next. 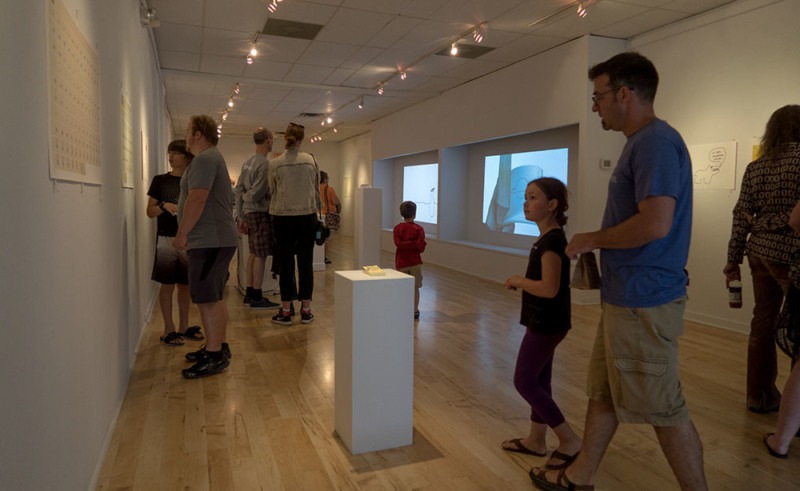 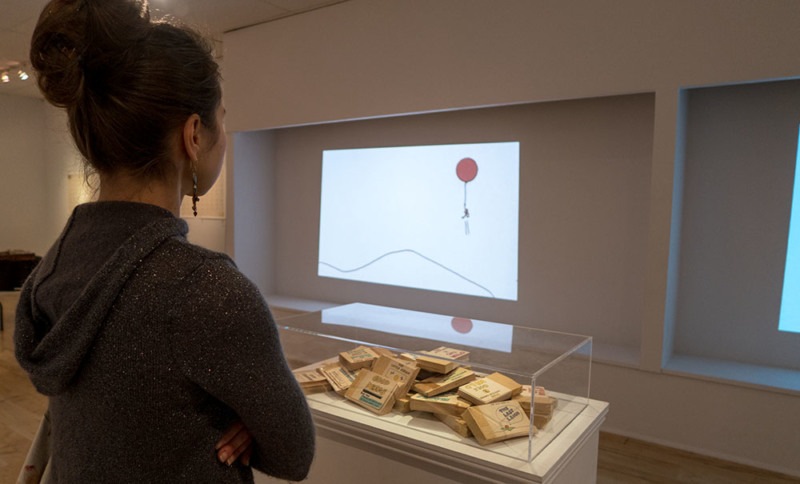 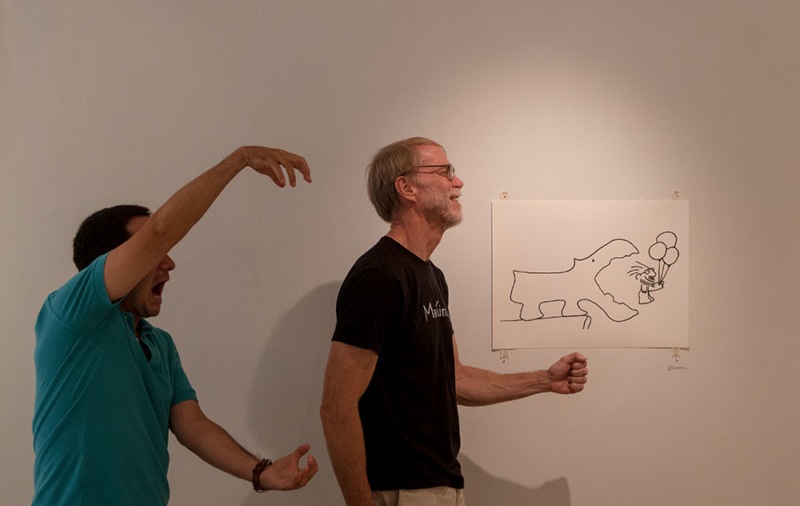 One evening, my phone started lighting up with questions about animation software, and almost before I had the chance to answer, video clips of fireflies glowing at night, a boat sailing across the ocean, and an old man smoking his pipe appeared. Olson, clearly inspired by the vision of his younger self but content to leave behind the light table and index cards, had started animating again with the help of a variety of Apple-brand products. Not only were there suddenly brand new animations, but with them, sound! The acoustic universe was a brand new, vast and uncharted territory for Olson that he was only able to navigate thanks to the ability to sample the great wide world of YouTube. (Below is a video of a work-in-progress by Tom, Noah and the Lonely Firefly.)
As Tom and I texted more, his ideas for beautiful, short stories flowed out, such as Jack and Jill and the Bean Stalk and Little Red Riding Hoodie, where Red and the Wolf end up going to a club and splitting ear buds. He also realized that the 1979 flipbooks were well suited for a 2017 refresh, and has started the process of tweaking the animations and adding music. The older pieces, wrapped in a warm, paper-that-is-yellowing patina, still feel fresh and continue to charm, but are completely transformed through the aid of technology and hindsight. (You can see a selection of these at video.truerthantrue.com)
But even beyond this, Tom and I started having text conversations about the artistic process: the difficulties of being creatively blocked about how to visually resolve a narrative, the pain and joy of learning new tools, and the excitement of looking forward to time to create (and thus the sudden appeal of the relative solitude provided by red-eye flights to visit his now LA-based wife). It feels like Olson is just getting starting on this second round of artmaking, and I am excited to see what the next year will bring for this flipbook philosopher. Regardless, I am happy to report that the tiger behind the first door wasn’t quite so scary after all.

UPDATE (2/10/2018): The next year has brought a beautiful new YouTube channel showcasing Tom’s work under his new label, Truer Than True Comix.